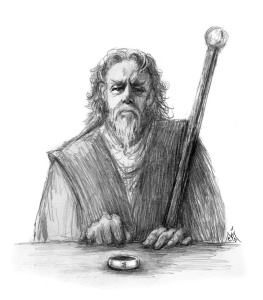 And welcome to my newsletter for September, 2014! Please feel free to forward this to anyone whom you believe might be interested in keeping up with me! To receive these newsletters regularly, drop me an email or subscribe online from my website ( http://www.JefMurray.com ) or at: http://groups.google.com/group/Mystical_Realms .

“It is true that the Hobbits were the first to put pipeweed into a pipe and set fire to it,” said the old man. “But, it is also true that I was the first to make the latter step unnecessary.” Alatar drew gently on the odd device in his hand and blew several smoke rings, each of which neatly threaded its way through the ever-widening circle of its predecessor.

The smoke curled and wreathed the kerosene lamp overhead, and from the thicket beyond the edge of the porch, the evening din of frogs and cicadas was deafening.

“I have to confess that I’ve never understood the attraction,” said the younger man. “I abhor smoking; it’s a filthy habit.”

“It is indeed!” said Alatar, this time sending multiple tiny rings chasing each other around the head of his companion, who laughed at the trick. “That is precisely, Charles, why I was so keen on creating this device. It produces no ash, leaves no lingering smell of smoke, and is entirely benign, health wise.”

He held up what appeared to be a typical tobacco pipe, but embedded in its stem was a glass cylinder. Within that cylinder, a transparent liquid glowed blue in the dim light.

“What was it you called it?” Charles asked.

“A ‘Qalyan’. It is a name I encountered on my eastern travels. Strictly speaking, it references a type of a hookah that is used in the east to smoke traditional pipeweed. But, since the original Qalyan often uses liquid to cool the smoke, I thought I might adopt the name for my own creation.”

Alatar drew deeply at the mouthpiece, and then breathed out the smoke in a large plume. Beyond the light of the porch, the two men could hear laughter, and a dim knot of figures could be seen approaching the front gate. “Good evening, gentlemen!” A tall cloaked man waved his hand as the group passed by.

The man nodded, and then rejoined his group. They faded off into the darkness that swaddled the village road.

“You’ve often alluded to your eastern travels,” said Charles. “But what places have you visited over the years?”

“Oh, far too many to recount in one evening; it would take more time than that just to list them all, and most are unlikely to be familiar to you. Some, in fact, are now places whose names have been lost to all but a few.”

“What…you mean there are places you’ve seen that no longer exist?”

“Do you find that so unlikely? I am much, much older than you, Charles, and yet there are towns and villages that thrived only a dozen years ago, but that today have been totally extinguished: by war; by abandonment; by disease. The world is always changing, always sifting its inhabitants, always rearranging the present; yet pressing ever forward: learning; experimenting; searching….”

“Ah! That’s the real question, isn’t it? What is life all about, after all….” Alatar chewed on the tip of the Qalyan thoughtfully, and then raised his eyebrows at Charles. “What do you think?”

“What do I think? About the meaning of life? It seems that would be a better question for you to answer. You’re the one who’s had so many more years to ponder the issue, after all. And aren’t you the wiser of the two of us?” Charles smiled innocently.

“Dodging the question does not answer it, Master Charles!” said the old man, “Nor is the number of one’s years any guarantee of wisdom, as you ought to know.”

“But you do have some of your own thoughts on the subject, I’m sure. I mean, you can’t have had the experiences you’ve had without coming to some –” Charles broke off suddenly and slapped at his arm. “Damn these mosquitoes! Why don’t they ever bite you?!”

“Obviously because I’m not the one asking the annoying questions! But, here, take a few puffs from the Qalyan, and they’ll leave you alone.”

Charles took the pipe and drew on it, then blew out the smoke. A smile broke over his features. “Hey! It tastes like licorice!”

“Then that’s why it tastes that way. The flavor changes with each person’s whims, you know….”

“Would I kid you?” The old man smiled. “Now, with regard to the meaning of life, I sense that you are going to insist on turning the issue back on me. But, since I’m also in a pleasant mood this evening, I’ll allow myself be baited…this time.”

Alatar leaned forward in his chair, propping his chin atop his fingertips. He lifted his gaze toward the darkened front yard and stroked his short-cropped beard. The lightning bugs were just starting to twinkle in the bushes at the road’s edge.

“It all begins with whether there is meaning to life at all, of course, but I think we can dispense with that issue straight away. Neither of us is an atheist, correct?”

“Then that’s the tough part dealt with. We needn’t go into the problem C.S. Lewis described: you know, advising a would-be atheist that he couldn’t be too careful about his reading material.” Alatar chuckled. “Alright then, what does that leave us with? Really, simply with whether the meaning of life is individual or collective. That is, whether there is the purpose, or just multiple individual purposes. Your call….”

“The purpose works best for me.”

“Ah! Gabriel told me you were clever! But, why so?”

“Because if there are only individual purposes, that pretty much makes things devolve into no purpose at all, doesn’t it? With everyone’s purpose being equally valid, there’s nothing that can be true and nothing false; everything is subjective, which means that all purposes are equally…well…meaningless.”

“Well done! So, we know there is a purpose. That’s the beginning of all wisdom. And with such a monumental conviction in hand, we would do well now to adjourn to the Pony.”

“What?! But we’re just getting started here, aren’t we? Why head to the Pony in the middle of such a discussion?!”

“Because, there is no better way to contemplate what the purpose of all of our existence is than over a pint.”

“But, wait! Surely you can do better than that! I mean, in all your travels…?”

“In all my travels, Charles, I have seen many, many things, and to recount them all here, whilst the merry companionship at the Pony remains untasted and untested, would be an insult not only to what I have seen, but also to the most important aspect of existence.”

“And that is, that the Creator has a marvelous sense of humour, and that He desires our happiness.”

“Are you sure about that? I mean, for all people?”

“Yes, for all people. That does not mean that He approves of our conduct along the way, by any means, or that all paths lead equally to Him, or even that all paths lead to him at all. But the desire that we all find joy, friendship, love, and hope; that we learn to want only the best for others; that we come to know that there is purpose to all we do; that there is meaning in honour, loyalty, self-sacrifice, and even suffering; I know that these are all true, and all part of the bigger plan….

“…but right now, part of that bigger plan is also awaiting us…at the Pony.” Alatar winked.

“I mean that I have an ulterior motive in wanting to get you there, my boy! See, the moon is just rising, and that means we are awaited.”

“Awaited! By whom? I’m not in much of a mood for merrymaking this evening.”

“Ah, you will be with the proper company.”

“But my proper company is unlikely to be at the Pony this evening; she’s in Italy.”

“Are you so sure about that?” Alatar winked again.

“Wait! You mean Sogna’s here too?! How on earth did you manage that?!”

“There are many mysteries in this world, Charles, and it is not my intention to enlighten you concerning all of them. So, come along…”

“Well, alright. But, speaking of mysteries, what about these mosquitoes?” Charles asked. “Are they part of that bigger purpose as well?” He slapped at another of the annoying creatures.

“Ah, that is a different topic entirely,” said the old man, handing him the Qalyan once more. “And it is one that we must pursue in the company of your paramour; the ramifications of original sin and of the Fall.….”

“Then you really are a wizard, aren’t you?”

“So, if you’re a wizard, and if you know so much, why on earth did you choose this Ranger’s outfit for me to wear to this village? I’m not a Ranger, you know.”