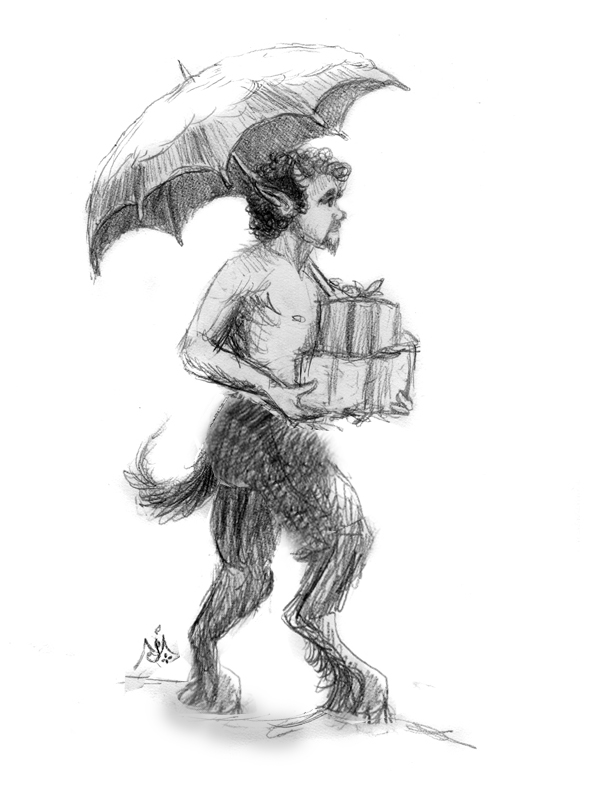 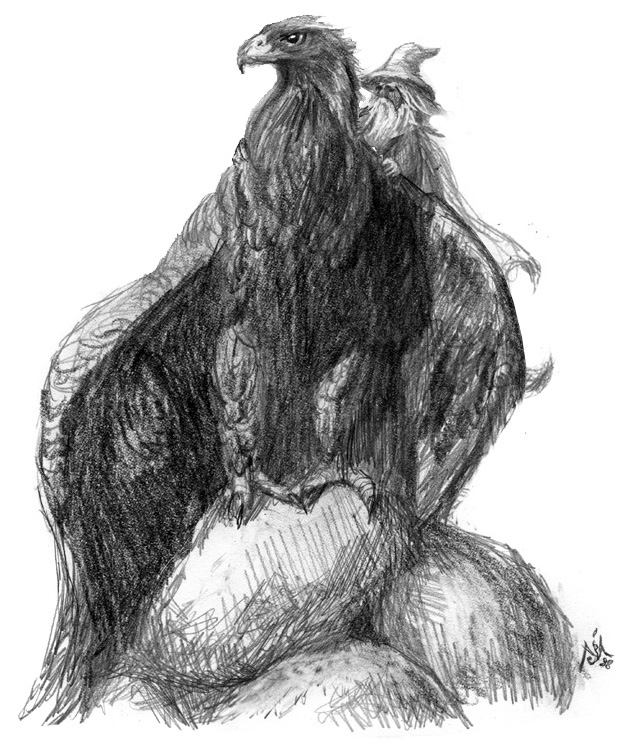 I spent an unsettled Saturday traveling the Great East Road, among the wild and tangled woods that climb ever upward toward the Misty Mountains. Halting Brego in the Trollshaws, many leagues west of Bruinen, I spied a prospect opening upon the northern marches; here I beheld a glimmering lake on which played sunbeams that smote the moody scape. And while clouds churned and thunders threatened, I hastened to set up my easel and sketch the scene.

But just as the storms most threatened, I perceived a light in the west and heard the thunder of horse’s hooves upon the road. I sought shelter, but none was to be had. Yet, just as I feared the worst, one of the Fair Folk galloped into view on a great white steed. Tall, he was, yet fell, with power in his hand, and he merely nodded as he fled yet eastward on some grave errand. But in his passing, the gloom was vanquished. Golden light poured upon the road and pursued him; and in his wake I perceived a chiming of bells and a quickening of the air, as if all of these wild realms had been cleansed by his passing. 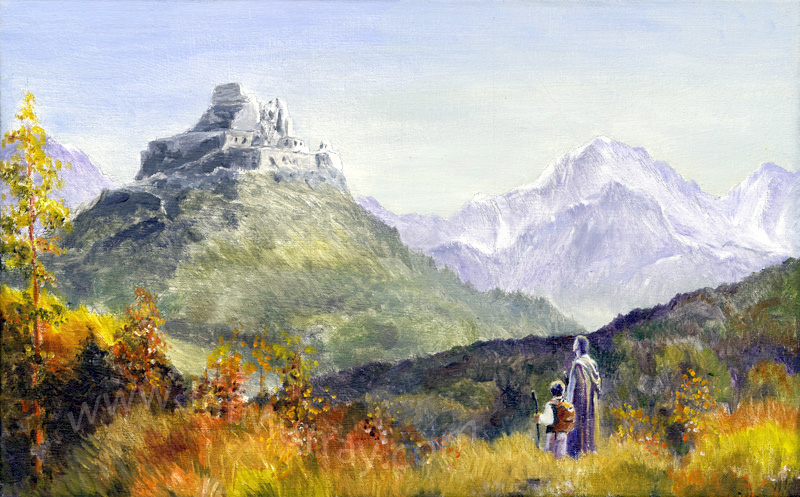 And welcome to my newsletter for June, 2012! Please feel free to forward this to anyone you believe might be interested in keeping up with me! To receive these newsletters regularly, please drop me an email or subscribe online from my website (http://www.JefMurray.com ) or at: http://groups.google.com/group/Mystical_Realms . Notices of events and items of interest are at the bottom of this email.
Pitchers ===============

My first book, “Seer: A Wizard’s Journal”, has been formally released as the inaugural offering from Oloris Publishing, a new imprint of the Middle-earth Network (www.mymiddleearth.com). Oloris is dedicated to bringing new multimedia works to fantasy, mythology, and sci-fi fans worldwide, and I am honored to have had “Seer” chosen as their first offering.

You can learn more than you’d likely ever want to know about Oloris, and about “Seer”, by clicking on of the following link:

Summer is upon us. And aside from our customary charges (Ignatius the spoiled-rotten hamster and all the robins, cardinals, wrens, squirrels, and chipmunks that abound within the MooseNest borders), we’ve been managing our neighbors’ menageries while they’re away. New wards include mollies, guinea pigs, three dinner plate-sized turtles, and Prissy the Cat.

The poignant part of caring for all of these critters is that we’re reminded of God’s immense imagination as well as His sense of the strange. As warm weather sets up shop, there is hardly anything odder than watching three enormous turtles vie with each other for bugs, or spying guinea pigs absconding with carrot sticks. And Prissy the Cat is an education in herself; she bounds upon my lap when I come to feed her and purrs like an idling freight train as we watch the evening sun set over the treetops.

Summertime reminds me of how little we know about the world around us. This, our Middle-earth, is filled with glorious glens and deep leafy dells, each flush with unnamed flora and fauna. It moves in odd rhythms: stillness by swollen streams at dawn, the rise and rout of thunderheads in heat of afternoon.

Summer is cicadas and crickets and katydids, each with its own distinct dialect; and lightning bugs, named by northern folk “fireflies” or “glow worms”, that first appear high in branches, then descend as the days ripen. As waifs, we would catch mason jars full and leave them as fairy lights on windowsills at night; releasing them and beginning the game again on the morrow.

Even after I developed a Tolkienian disdain for fairies, I always found deserted country lanes and fields to be pregnant with mythological possibilities. I would sit still on the verge, chiggers
notwithstanding, and hearken to every twig snapping and leaf rustling in the woods. I sat still as stone and waited for wayfarers. And I was rewarded time and again by the passing of squirrels, chipmunks, opossums, ground snakes, and even deer.

But what I really wanted was to spy out a Hobbit, or a wood Elf. A knight on his charger or a passing angel also would not have been taken amiss. But none of these came; for them, I must needs resort to mind’s eye or to paint and brush.

But the important part is that all of these _could_ have come; when summer sports, all portents are possible.

I’m like Puddleglum in C.S. Lewis’ The Silver Chair. If told that in this world there are no Elves, or Hobbits, or knights or damsels in need of saving, if someone presumed to prove there were no angels or saints, then we would all be beggared; and I would rather believe in such a world, even if wrong, than foreswear such magic and mystery. A world without these would drown in despair; and my heart yet whispers “deceit” when a Christopher Hitchens brays on his bugle.

Years ago, long after I had first consciously assented to the tenets of Christianity, there came a point when my heart caught up with my head. There came an overwhelming maelstrom of emotion, as I realized, to the very core of my being, that the whole story of a spurned savior come to earth to save us all was sooth. I gasped aloud as I grasped that angels and demons, saints and the Savior, were not some delusions developed to tame toddlers, but literal truths.

And life seemed infinitely dearer to me with that realization; the universe itself opened and expanded as I pondered such power, such potential, such promise….

But now, summer is again upon us. Enigmas abound. Mollies are multiplying and tadpoles transforming. Now is the time to return to the woods in search of unicorns and halflings. Now is the time to mimic the brave and chivalric knights and to seek out adventure in sunny dales and glen’s gloaming.

• The Middle-earth Network ( http://mymiddleearth.com ) has a new store up and running that will include many items of interest to fantasy and sci-fi fans. You can access it by going to http://store.mymiddleearth.com/ . The works of many talented artists, writers, musicians, actors, etc. will be featured there over time, and many of the items listed will only be available through http://mymiddleearth.com. Do take a look!

• The Return of the Ring 2012 (see http://www.returnofthering.org/) will be a huge Tolkien-themed conference and gathering at Loughborough University on 16-20th August, 2012. Although I will not be able to attend in person, I am hoping to have some of my work included, either in publications in support of the event, or at the art show. Stay tuned for more details! 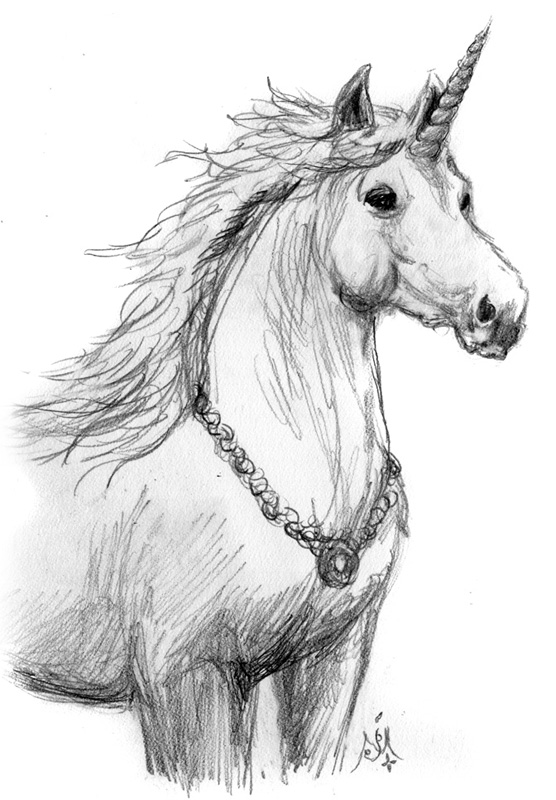 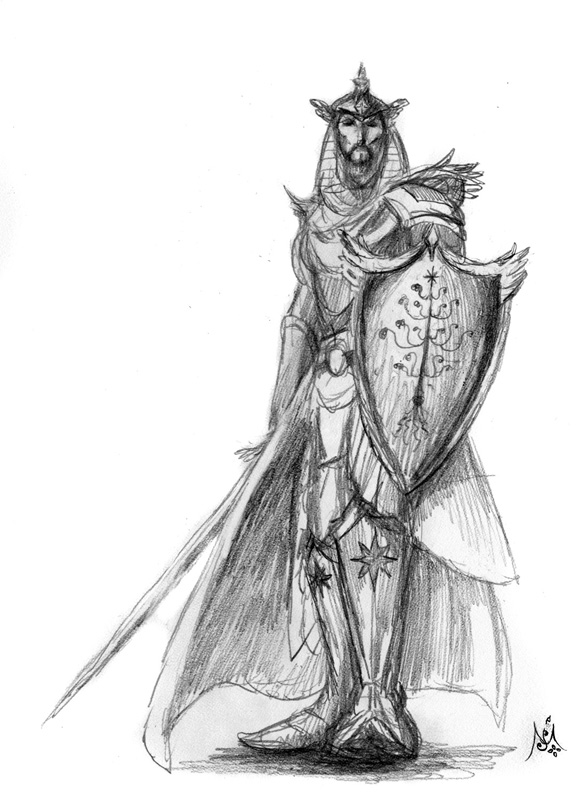