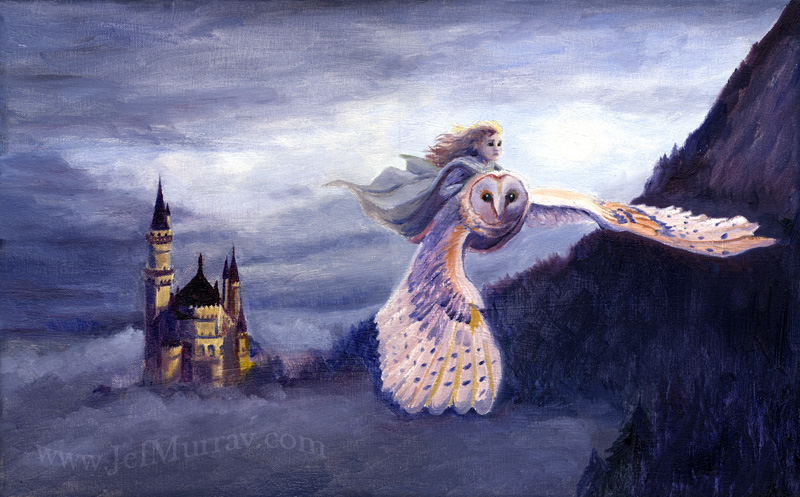 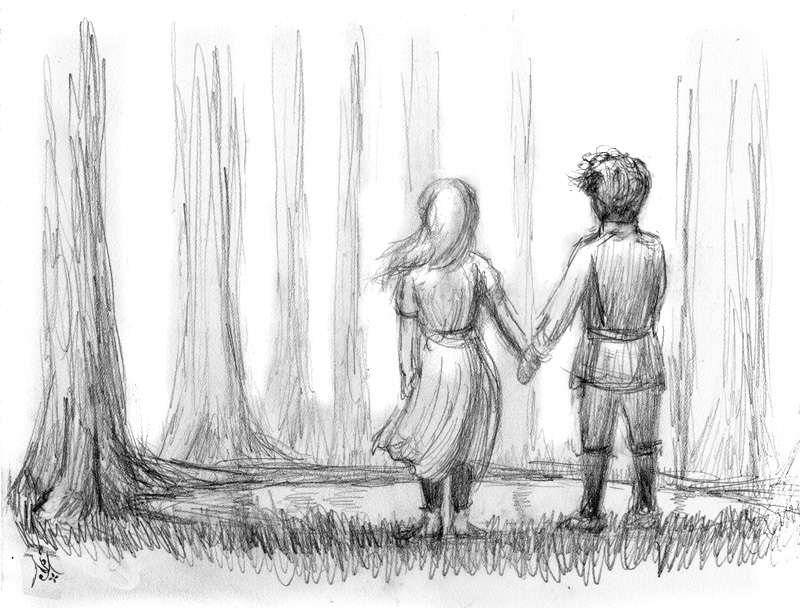 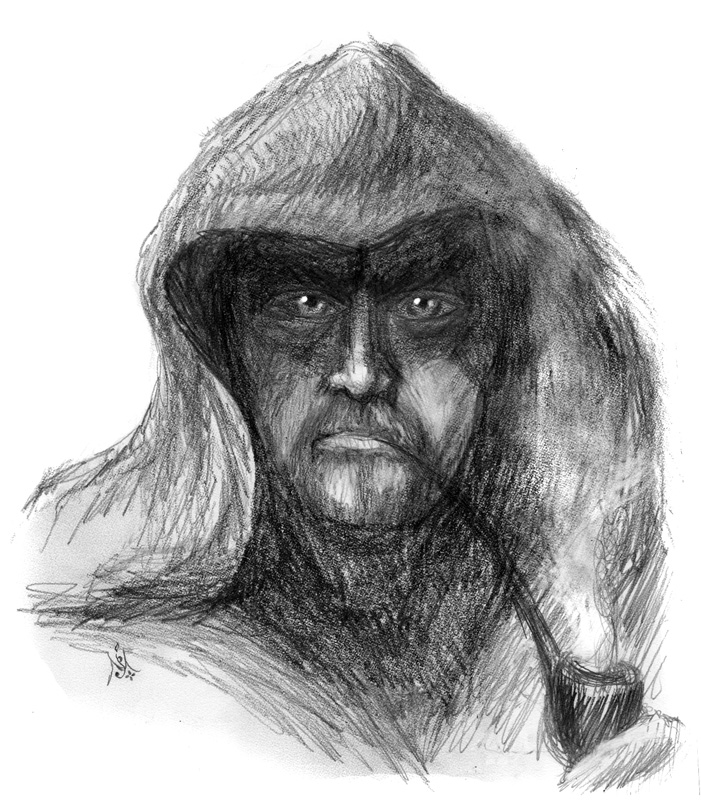 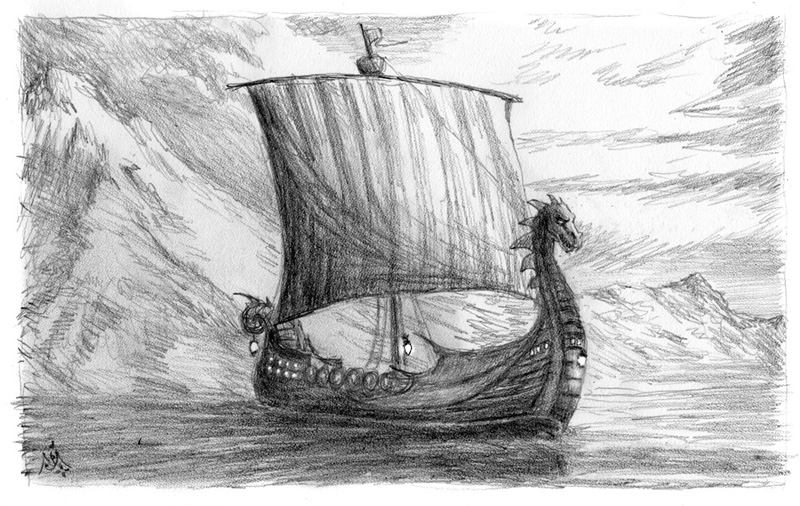 You can find this drawing as well as a painting of the same at www.JefMurray.com. Just search on “Dawn Treader”. 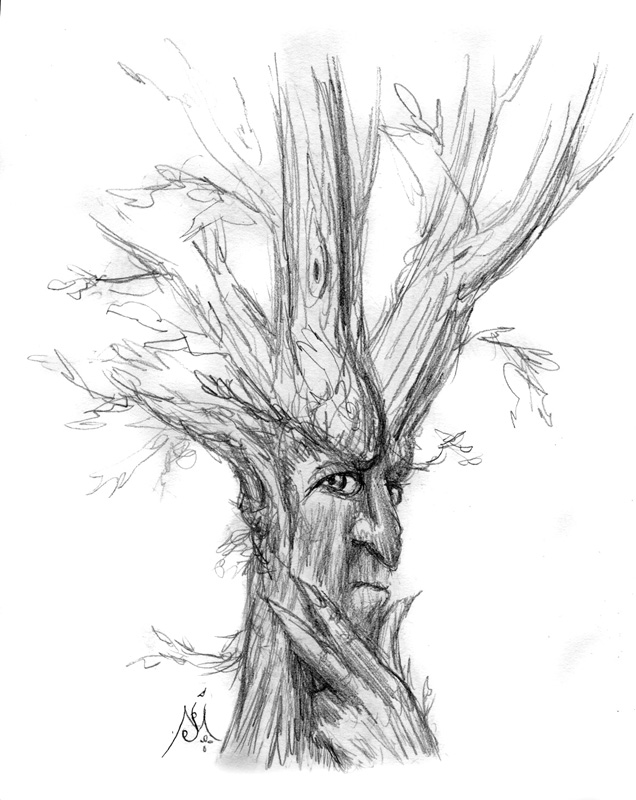 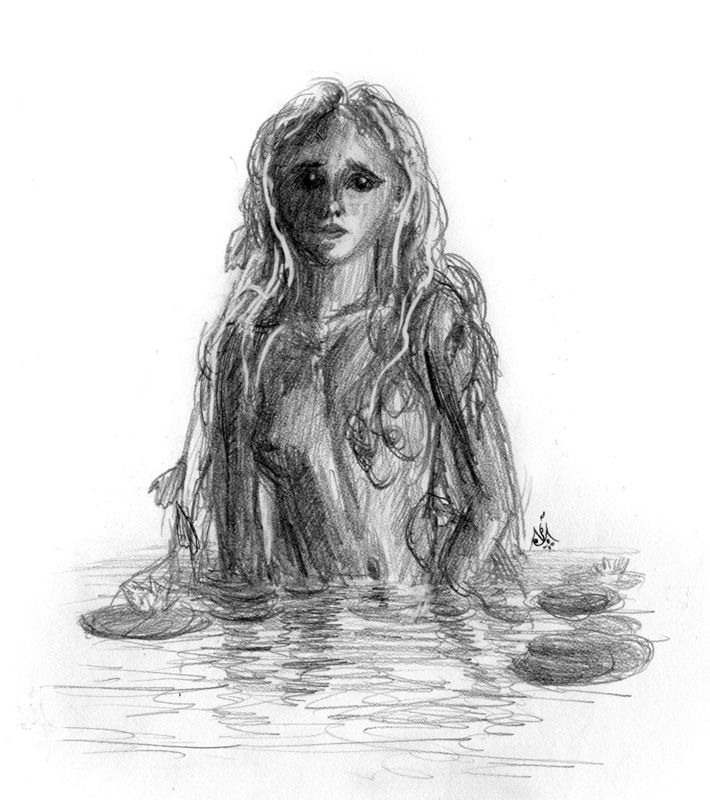 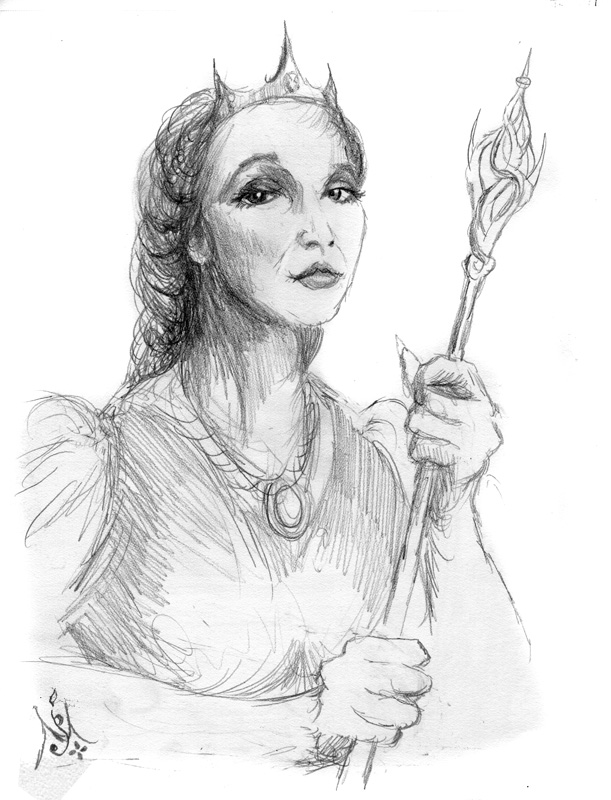 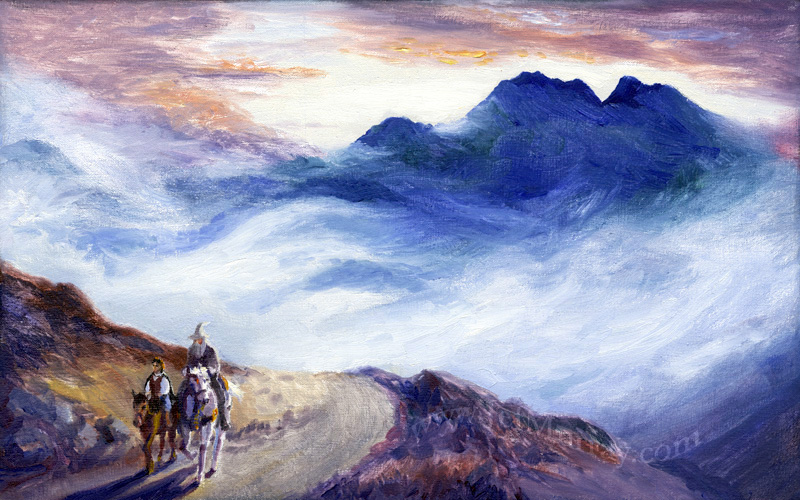 And welcome to my newsletter for August, 2012! Please feel free to forward this to anyone you think would be interested in keeping up with me! To receive these newsletters regularly, please drop me an email or subscribe online from my website (http://www.JefMurray.com ) or at: http://groups.google.com/group/Mystical_Realms . Notices of events and items of interest are at the bottom of this email.

My first book, “Seer: A Wizard’s Journal”, has been formally released as the inaugural offering from Oloris Publishing, a new imprint of the Middle-earth Network (www.mymiddleearth.com). Oloris is dedicated to bringing new multimedia works to fantasy, mythology, and sci-fi fans worldwide, and I am honored to have had “Seer” chosen as their first offering.

“Seer: A Wizard’s Journal” is now available online in paperback and eBook formats at: http://store.mymiddleearth.com/store/products/category/oloris-publishing/ . It is also available at Amazon.com, Barnes and Noble, and should be carried by most brick and mortar bookstores.

You can learn more than you’d likely ever want to know about Oloris, and about “Seer”, by clicking on of the following link:

[Concluded from my July 2012 “Mystical Realms” Newsletter. To read the first half of this tale, entitled “The Apothecary,” click on http://mysticalrealms.mymiddleearth.com/2012/07/03/mystical-realms-newsletter-for-july-2012/ ]

“So, what will it do?” Jill stood looking at Burn. She was still holding the tiny bottle with the green pill inside.

“It will help you to see things more clearly.”

“But, I thought what I needed was forgiveness.”

“Yes, but before you can find that, you have to be certain where to seek it.”

“And this pill will help me with that?”

Burn nodded. “Yes, I believe it will.”

Burn ushered her to the door and they stepped into the evening air. Burn locked the shop behind them and led Jill toward the wooded town square three blocks from the apothecary.

“It would be prudent for me to stay with you,” said Burn. “I know the pill will cause you no harm, but its effects might be a bit disconcerting. Having someone you know with you will make it easier, I believe.”

“Can you at least tell me what to expect?” asked Jill. “I mean, am I taking peyote, or LSD, or something along those lines?”

Burn laughed. “No, no! Those are blunt instruments compared with this. All this will do is to temporarily amplify talents that you already possess: primarily your gifts of sight and insight. That said, some of what you see may be a bit of a shock, so I’ll be beside you in case you need reassurance.”

“Will you be able to see what I see?”

“Perhaps. But whether I am able to or not, you may wish to describe what happens and what you perceive. That may help you stay…tethered.”

They had reached the square. There was a plaza in the center, and park benches lined curved pathways around the periphery; these wove their way through immense oak, mimosa, and magnolia trees. The plaza was filled with mothers and infants, couples strolling through the lush oasis, and whole families with ice cream cones watching the light fade in the west. Burn chose a bench near the middle of the park, away from others, but with a clear view of the sky, the trees, and the open plaza through which the crowd passed.

“Place the pill under your tongue and let it dissolve.”

“How long will the effects last?”

“An hour, perhaps, or possibly a bit less.”

Jill pulled the stopper out of the bottle. She shook the pill into her palm and placed it under her tongue.

“Let it dissolve. Then, keep your eyes open and tell me what you see. In the meantime, tuck this away for later; you may want it before the night is spent.” Burn handed her a folded piece of paper. Jill looked at him curiously, but tucked the note into her purse without reading it.

“Things still look pretty much the same,” Jill said after a minute had passed, “although, you look a bit different…sort of like you’re glowing.”

“Don’t concentrate on me. Look around us at the other people in the square.”

Jill watched in silence for a few moments. “You know, there seem to be a lot more people on the square than there were before. For every regular person I see…well, there are maybe two or three of the others: the glowing people.”

“Describe the glowing people to me.”

“Like I said, they’re tall, and quite beautiful: kind of in a classical way, almost like they were painted by one of the great masters. And they each seem to be associated with someone; they’re either walking with them or sitting with them or….Oh!!!”

“I just saw one of them disappear! He just faded from sight! And one woman just appeared and started whispering in that young girl’s ear!”

“Well, she wasn’t there a moment ago, and then she…it’s like she materialized, slowly. And now, she’s stopped speaking to the girl. She’s turning away…and she’s vanished again!”

Jill turned to look at Burn as she spoke, but was suddenly struck speechless. Burn was still seated beside her, but he was completely transfigured; no longer a stooped old man, his hair and beard billowed and blew in a gale she could not feel.  And, like the tall figures she saw in the square, Burn’ face and body radiated a bluish-white aura, as if light from another world flowed through him.

Burn took her hand in his and patted it. “It’s alright, my dear. You’re not imagining things. You’re simply seeing them clearly for the first time. Have no fear.”

“But…why do you look like that, Burn? And who are all of these people?” Jill looked in bewilderment at Burn and at the crowds of illuminated beings thronging the square.

“They are messengers; creatures of spirit who tend those who are still bound to this earth.”

“So, are you saying they’re angels?!”

“If you’d like. Each person on earth has at least one, and often many, of these whose sole purpose is to aid them and protect them.”

“Protect them? From what?”

“I could show you that as well, but the dark things will not come into the light readily, and we will not speak of them here. In such a wholesome place, they will remain hidden, leaving the messengers and their wards undisturbed. But they never cease trying to lure all away from the Light. And they have been at work on you for some time now.”

“By encouraging you in your despair; by blocking you from seeing, and by preventing you from shedding the tears that are ofttimes necessary for healing. But, behold! One comes who will help you to better understand….”

Jill looked up and saw an angel striding toward their bench. In his hand was clasped that of a small child, just a toddler, and immediately she understood.

“She’s mine, isn’t she?” Jill said, looking up at Burn, tears welling up in her eyes.

“Yes, Jill, she is. But she isn’t here to confront you; she’s here to help you to see. You have been the prey of many dark forces; yet you, nevertheless, were guilty of acquiescing to them. She has come so that you might know, for certain, that those forces exist, and that there is always hope for redemption. But she has not come here for you to hold her in your arms…you prevented that years ago, by allowing yourself to be deceived.”

The child came right up to Jill and looked longingly into her eyes. Jill reached out for her, but her hands swept through the still night air, encountering nothing.

“But can’t I speak to her?” Jill asked. “Isn’t there anything I can do to help her?”

With a final sad look at Jill, the child turned away. And slowly, she and her guardian faded into the night air and were gone.

Burn continued to hold her hand, and when her tears began to subside, he spoke to her again. “You asked whether I had a pill that could help you to find forgiveness. The only way anyone can find that is to understand the true nature of the world around them, and their own place in that world. You’ve taught in secular schools for so long that you’ve lost all sense of the mystery and the magic that envelopes each of us, and the great goodness that is available to you, always.”

Jill looked up at Burn again. He was no longer the blazing figure of a few minutes before, although he still glowed gently in the dusk. She glanced at the square; most of the angelic figures were gone, and those that remained were fading into ghostly shapes that yet attended the couples and families that strolled the sidewalks.

The paper I gave you has the name of a priest on it, Father Hildebrandt. Talk to him. He can help you better make sense of all that you’ve seen tonight.”

“No. My work, for the time being, is done. When you next pass by the apothecary, you’ll find there only a deserted shop front, so I fear our regular chats, for now, must come to an end.”

“I’m not going away. But the apothecary has served its purpose, don’t you see? It was created for you so that I could help you; and now you need the help of someone else.”

“But where will you go? And can’t I ever see you again?”

Burn smiled. “You can talk with me anytime you wish, but I may not be able to answer you…at least, not directly. Don’t you see, Jill? You’ve been given a great gift. Most people never meet their guardian angels face to face until the final moments of their mortal lives. But you have. Use well that gift, and all you have seen this night.”

Burn lifted Jill’s hand to his lips, kissed it, smiled once more, and then faded away.

Jill sat dumbfounded. She swept her gaze over the square, and even the faintest of the angels had now vanished. She found the slip of paper in her purse and noticed that it, too, glowed gently, and seemed to be fading. She quickly memorized the address written upon it. “Father Hildebrandt,” she said to herself over and over again, “Father Hildebrandt…I mustn’t forget.” 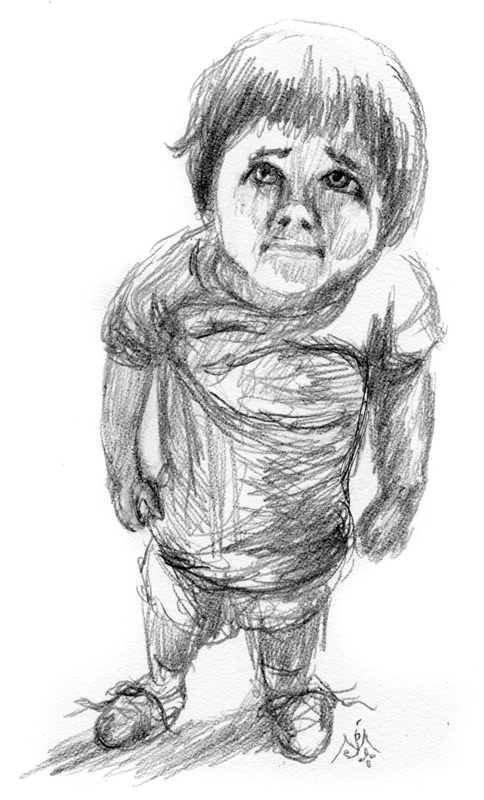